Today's blog post is about the climate crisis and I'd like to preface everything by saying Don't Panic. It is easy to get overwhelmed, but solutions do exist that can help us address this crisis. That being said, let's dig deeper and go beyond a list of quick fixes. Nobody really believes global warming will be eradicated simply by switching to energy efficient light bulbs or using fewer plastic bags (although these still aren't bad ideas). We need to think bigger at the societal level.

Today I was at a children's birthday party when I was hit with an attack of climate anxiety. The adults at the party were talking about the burning Amazon rainforest, the dying Lake Winnipeg, and the rising temperature. To them, climate catastrophe was a foregone conclusion. They blithely discussed disaster as I watched my three year old play with his cousin. We opened presents and ate birthday cake, while I wondered what kind of future my kids would have. The cognitive dissonance was crushing. I'm used to feeling this way in the echo chambers of my social media feeds, but rarely have these conversations bled into real life. I felt anger and despair that people are so quick to accept that catastrophe is unavoidable, content to go on with business as usual, leaving future generations to pick up the tab.

Lately to tackle my growing unease, I have been reading Drawdown: The Most Comprehensive Plan Ever Proposed to Reverse Global Warming. It ranks the hundred climate change solutions with the most potential for removing carbon from the atmosphere. Some of the solutions are ones we can do at an individual level, like eating less meat, composting, or switching to hybrid or electric vehicles. However, most solutions tend to be larger scale, focusing on industries or infrastructure. For instance, onshore wind turbines are ranked as the second most effective solution. "An increase in onshore wind from 3 to 4 percent of world electricity use to 21.6 percent by 2050 could reduce emissions by 84.6 gigatons of carbon dioxide." This would also result in a net savings of 7.4 trillion dollars. Many other solutions (such as biking infrastructure, solar farms, or regenerative agriculture) follow a similar pattern of removing carbon, while offering overall net savings and often other side benefits. 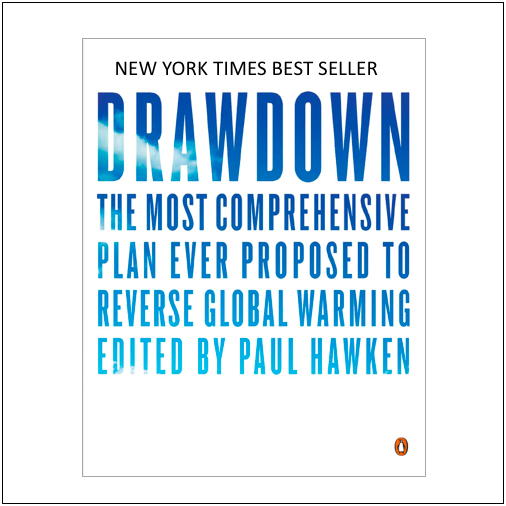 However, these solutions take time and the upfront cost can be daunting. Many solutions require long term thinking and accompanying monetary investment, which can be challenging for governments that are more focused on shorter election cycles. Certainly, in the current Manitoba election race many environmental promises leave a lot to be desired. For example, the PCs have promised to increase the biodiesel requirement in gasoline from two to five percent. For the record, biofuels don't even rank as a solution in Drawdown, which puts greater emphasis on electric vehicle technologies. The NDP have indicated that they will invest 10% of carbon tax revenue into green initiatives. The rest would go towards a $350 rebate on electricity bills. They say the rebate will encourage people to make greener choices. However, this seems pretty unlikely if the rebate is not connected to an initiative aimed at reducing emissions. As far as I can tell, neither front-running party has offered much of substance towards climate solutions.

Short term thinking doesn't need to be the case. In 1950, Winnipeg was devastated by a flood that caused $125 million in damages. Seeing the danger, Premier Duff Roblin built the Red River Floodway, costing $65 million (equivalent to $505 million today). He was heavily criticized, but environmental disaster was averted down the road. The climate crisis is a bigger environmental disaster, and we need similar long term thinking. Increasingly, environmental issues are becoming a part of our public and political discourse and I have hope that we are moving in the right direction when it comes to taking collective action, even if we aren't there yet. More than ever we need to hold our elected representatives accountable for securing a safe and healthy future. Ultimately, we can get through this, but only by working together for big picture solutions.

This blog has recommended a number of books that include LGBTQ characters, particularly books geared for middle years students. For students who are LGBTQ, who are questioning, or who have LGBTQ family members,

On the Come Up is Angie Thomas's follow up to the hugely successful The Hate U Give. It tells the story of sixteen-year old Bri, an aspiring rapper who aims to make it