Grenade, by Alan Gratz, tells the story of the invasion of Okinawa during World War II. The book features two characters' perspectives: Ray, a young American soldier, and Hideki, an Okinawan boy who has been drafted by the Japanese into the Iron and Blood Student Corps. In telling the story from both perspectives, similarities between the two characters are revealed and Gratz succeeds in humanizing both sides. 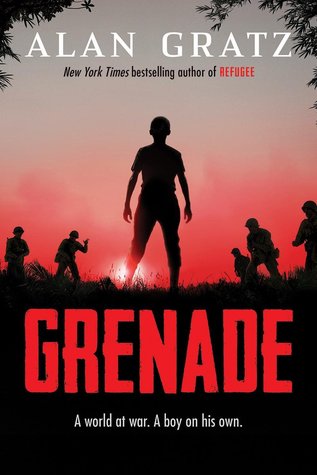 This book has a lot to say about the nature of war. Throughout the story, each side is portrayed as both humans and monsters. The message is clear that war turns men into monsters, even if they started out as regular farmers, fishermen, or plumbers. Importantly, Hideki eventually chooses to put down his weapon, take a risk, and overcome the brutality of war by rejecting aggressive action. Hideki's journey is particularly powerful, as he struggles under the shadow of a cowardly ancestor. His eventual peaceful choices allow him to demonstrate courage in a far more powerful way than picking up a gun. The story ends with some hope of a rebuilt tomorrow, even as the Okinawan people are overwhelmingly devastated by the war.

Grenade is an excellent historical fiction choice for middle years students who are looking for a war story, particularly a more graphic one. Gratz does not flinch from describing the devastation the conflict wrought on civilians of Okinawa or the heavy toll on soldiers of both sides. Violence in the book is ever present, although the author does avoid lingering too long on excessively disturbing description. In any case, it is difficult to imagine how this type of story could be told without demonstrating the violent stakes of war. As in his previous books, like Refugee, Gratz successfully humanizes the characters of this novel to illustrate how humanity can overcome conflict and work towards a more peaceful tomorrow.

Being the Change, by Sara K. Ahmed, is a book in dire need of a new subtitle. Lessons and Strategies to Teach Social Comprehension sounds like a book that teaches basic social skills.

Hello, Universe is a Newbery Award winning book by Erin Entrada Kelly. It tells the story of four middle schoolers whose lives collide on the first day of summer vacation. Ultimately it is