Surviving the City, written by Tasha Spillett and illustrated by Natasha Donovan, tells the story of two girls dealing with the dangers of growing up Indigenous in Winnipeg. When main character Dez's grandmother becomes sick, she runs away to avoid being placed in foster care. Her disappearance deeply impacts her friend Miikwan, bringing up memories of her own missing mother. The focus on this topic is particularly resonant with the recent release of the Final Report of the National Inquiry into Missing and Murdered Indigenous Women and Girls. It sheds light on this topic, helping young people better understand how this crisis affects those left behind and providing a springboard to discuss human rights violations in our country. 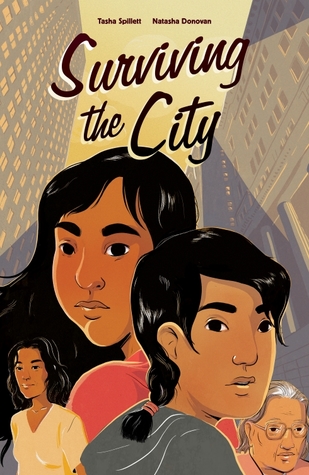 Surviving the City demonstrates the effects of colonialism and racism on Indigenous girls and women. For instance, Dez deals with an unsympathetic social work who threatens to remove her from her home, a situation that is likened to the residential school system and human rights violations of the past. The illustrations in the book effectively underpin this message, as ghostly figures representing missing and murdered Indigenous women populate the panels. An absent person is easier to ignore, but the inclusion of these figures gives a constant visual reminder of the scope of the problem. The figures are frequently drawn comforting or offering a protecting hand to living women and girls, counteracting the sinister dark creatures that are also found throughout the book. The dark creatures follow and influence men, giving stark reminders of the prevalence of racism, misogyny and violence.

While the dangers in the book are serious, the author also emphasizes the resilience of the Indigenous community. Dez and Miikwan remain firmly connected to their culture and Indigenous women are shown offering them guidance and protection. The novel culminates with a demonstration demanding justice for missing and murdered Indigenous women and offers empowering scenes.

By telling this story through the eyes of girls enduring dangers and traumas, Surviving the City opens our eyes to the violence and oppression that too many experience. It ends with statistics regarding missing and murdered Indigenous women, girls, and two-spirit people and suggestions for further reading. It is an excellent starting point for students to better understand these human rights issues and their effects on Indigenous people in Canada.

This Place: 150 Years Retold is an ambitious project that aims to retell Canadian history by centering Indigenous perspectives and experiences. With over a dozen Indigenous authors and artists, the graphic novel anthology

Last week, I was reading Daniel Haack's Prince & Knight to my three year old. When we reached the last page, where the two main male characters get married and live happily ever

The Teacher Bees Blog
—
Surviving the City
Share this