Summer is an excellent time to catch up on reading, so stay tuned for book reviews of texts that belong in the classroom and beyond. Today's review is on The 57 Bus, by Dashka Slater. This book has become a popular read among the teachers and students at my middle school, largely due to the thoughtful and sensitive way it examines a widely publicized crime. 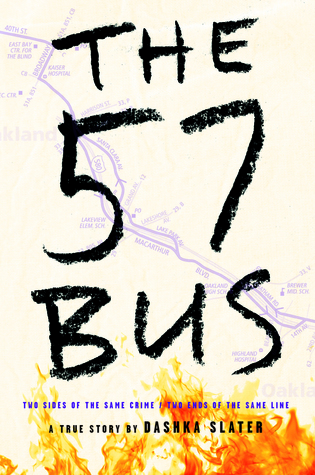 The book recounts the true story of two teenagers, Sasha and Richard, whose lives become linked after an incident on a bus in Oakland, California. While riding the bus, Richard sees Sasha, an agender teenager, sleeping on their way home. Intending to do a practical joke, he lights Sasha's skirt on fire, leading to serious injuries. The book describes the lives of both teenagers, along with the aftermath of the crime as Sasha recovers and Richard navigates his way through the criminal justice system.

This is an excellent non-fiction book for the classroom, due to the care it gives to accurately tell each teenager's story. In reading about Sasha, the reader learns what it is like to question one's gender identity and to face danger for being true to yourself. Interestingly, Sasha (who uses the pronoun they) doesn't back away from danger, intent on expressing themself even after the attack. Their story is inspirational and enlightening, since representations of agender people are still fairly rare in the media. As well, the book is educational as it teaches vocabulary relating to LGBTQ identity that would otherwise remain unclear for many readers. Similarly, the author describes Richard's story with compassion, as the boy, who didn't realize his actions would cause so much harm, must navigate the criminal justice system and potentially be tried as an adult.

The book allows us to catch a glimpse into two lives, of both an agender and an incarcerated black teenager. By seeing a piece of their stories, it effectively builds empathy for people who are often marginalized in our society. For this reason, I recommend this book for late middle school and beyond.

I have written a number of entries that analyze specific books from my Heroic Journey Literature Circle unit. To sum it all up, here is an overview of the unit, along with my

As part of my grade seven social studies course, I have spent the past few years teaching a mini-unit about refugees. In our curriculum, students are expected to learn about push and pull

The Teacher Bees Blog
—
The 57 Bus: A Story of Two Teenagers and the Crime That Changed Their Lives
Share this