I love when I can read a middle grade book and learn something entirely new. This is particulary true when it involves female protagonists who rise to a challenge. The Derby Daredevils: Kenzie Kickstarts a Team accomplishes this task by telling the story of Kenzie and Shelly as they put together a roller derby team. Written by Kit Rosewater and illustrated by Sophie Escabasse, The Derby Daredevils is an engaging book for middle grade readers. 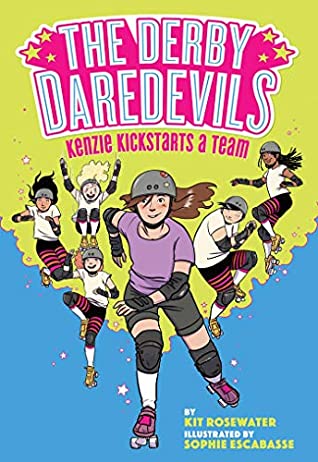 Representation of girls in middle grade texts can be problematic, where girls are often relegated to secondary character status or motivated by heteronormative romantic comedy tropes. It was refreshing to read a book that bucked these trends and easily passed the Bechdel test. The teammates work together to build their team and learn the game of roller derby, relying on each other to solve problems. Each member of the team has other interests, such as drama, skateboarding, or basketball, further emphasizing how these characters are up for taking on all kinds of challenges.

Another positive point is the LGBTQ diversity included in the text. Kenzie's father is transgender and he talks with her about life before and after transitioning. This discussion of identity helps Kenzie as she starts to understand her own crush on her neighbour and teammate Bree.

Combined with these subplots are themes relating to friendship, as Kenzie adjusts to her best friend developing new friendships with the rest of the team. Many kids at the upper elementary range will connect well with this theme, along with the adventures of Kenzie and her team.

When I write about books under the Education tag on my blog, I aim to recommend books I think teachers should read. Often I think these books give useful insights when it comes

While I was in middle school, I only read one novel with Black characters for language arts class: Underground to Canada. This novel told the story of four Black people escaping from slavery

Books for a Beautiful World
—
The Derby Daredevils
Share this