This Place: 150 Years Retold is an ambitious project that aims to retell Canadian history by centering Indigenous perspectives and experiences. With over a dozen Indigenous authors and artists, the graphic novel anthology delves into stories from across Canada that illustrate Indigenous heroes who have resisted, fought, protected, and survived. 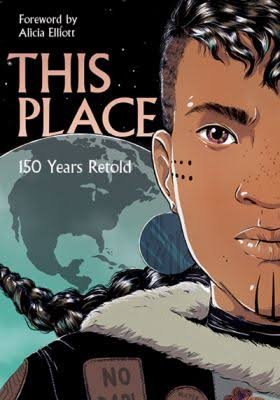 As I read the book, I was struck with how unfamiliar most of the stories were to me. I was a history major, but the stories and perspectives offered in these pieces were often new and unexpected. Here are a few highlights:

After reading This Place, I am painfully aware of my own ignorance. Canadian history is not just settler history. Indigenous heroes, perspectives, and experiences need to be throughout our history textbooks and classes. I am grateful to the authors of This Place for writing a book that educated me and helps jumpstart further learning. This Place is a welcome and necessary addition to middle school and high school classrooms.

Earlier this year I was asked to read Moon at Nine, written by Deborah Ellis. Our school inherited a number of copies and my principal thought they might be a good fit in

Surviving the City, written by Tasha Spillett and illustrated by Natasha Donovan, tells the story of two girls dealing with the dangers of growing up Indigenous in Winnipeg. When main character Dez's grandmother

The Teacher Bees Blog
—
This Place: 150 Years Retold
Share this