Over the last two years, I have been one of the teacher advisors for my middle school's Gay Straight Alliance or GSA. Started last year by student request, the group decided to focus on making our school a safe and welcoming place for LGBTQ students.

Some people might raise eyebrows at having a GSA in a middle school. Thankfully, my school division and administration has been supportive and encouraging. Many students start identifying as LGBTQ at this age or younger, or at least start questioning their identity. Considering the serious statistics involving LGBTQ youth and suicide, promoting a safe and inclusive environment in all schools is essential.

School can be a lonely place for these students, and having a place to meet up with others who are accepting can make a world of difference. Even better is having a school where diversity is celebrated and respected. I don't kid myself to think that my school doesn't have homophobic language in the hallways. Indeed the GSA informally kept track for a few days and it became apparent that this was a problem that needed addressing. But in the end, this is the point of having a GSA: giving students a voice to help make their school a safer and more respectful place. We may not be able to eliminate homophobic language at our school, but if we can work to reduce it, we are moving in the right direction.

Finding projects to work on in middle school can be challenging, particularly in communities where LGBTQ issues are divisive. By focusing on making our school more inclusive and safer, our group enjoyed a lot of success. Here are some of my favourite projects developed by our GSA.

This year, our group started off with a Pride Book Club. We ordered copies of several books featuring LGBTQ characters. Students had the opportunity to read the books, and then discuss them at our meetings. We wrote book reviews and presented them on our school's youtube channel, recommending other students check out some great titles. Then we distributed the books to our school's classroom libraries, ensuring better LGBTQ representation on the bookshelves of every room. Some of our favourites included:

Last year during pride week, we decided to promote acceptance of diverse identities. We gave every student in the school a sticky note and asked them to anonymously write an important part of their identity. Their responses could relate to anything, including hobbies, interests, cultural backgrounds, religious beliefs, gender identity, sexual orientation or anything else that came to mind.

We arranged the notes in a rainbow on the trophy case at the front of the school. Our aim was to show the diverse identities at our school and to embrace these identities. While some notes were a bit silly, the majority reflected the diversity at our school, and included some students who identified as LGBTQ. The message was that everyone deserves to be themselves and to be respected for who they are. It became a powerful display. 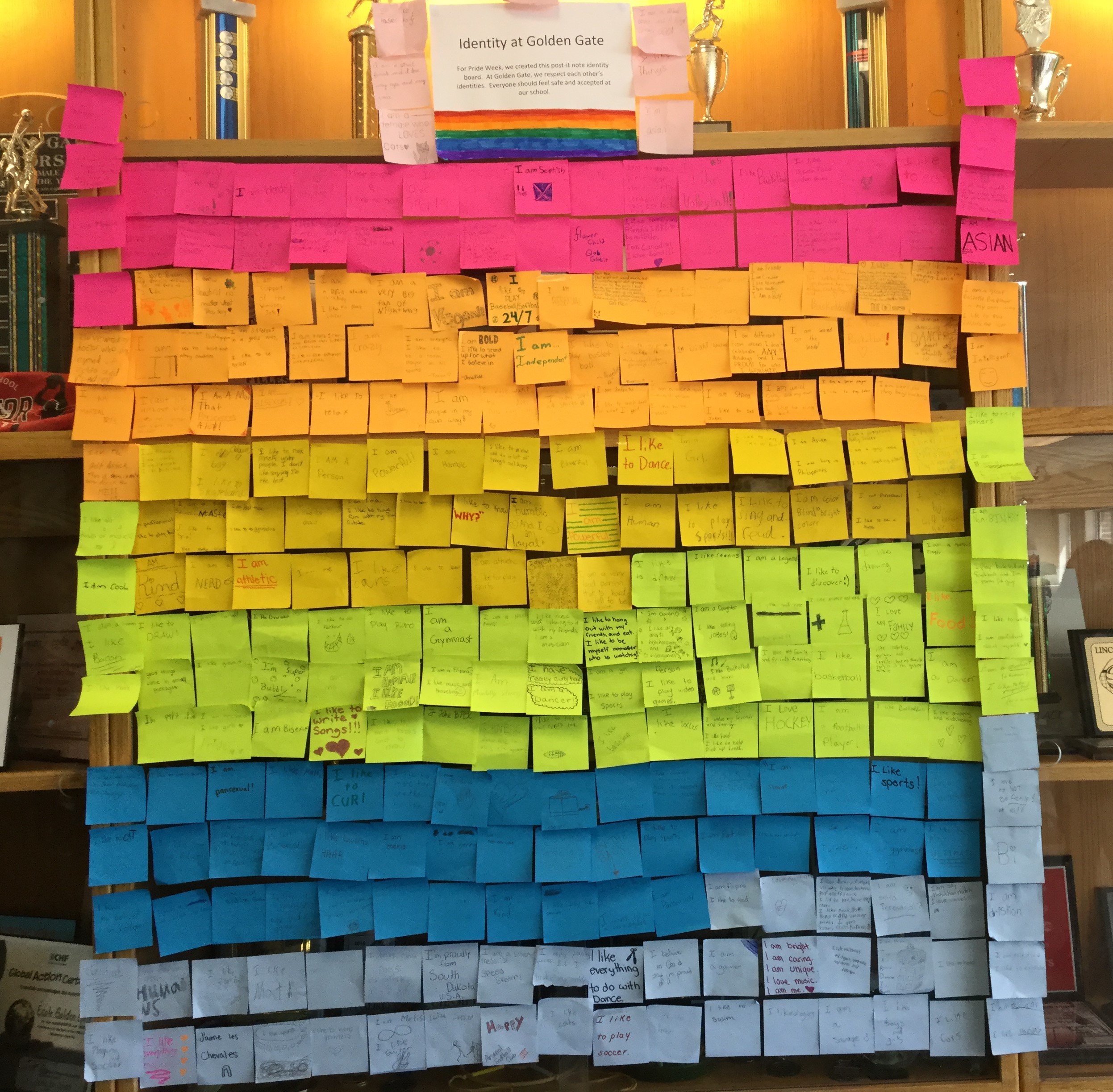 During Pride Week, the GSA organized a few different activities to promote respect and inclusion of LGBTQ students. First of all, they organized a film fest where interested students enjoyed a variety of short youtube videos that involve LGBTQ youth. Some had very powerful messages such as challenging "That's so gay" in a high school and busting down stereotypes in a small town. Others were cute and funny like the very popular In a Heartbeat animated short. Altogether they made for an entertaining and illuminating lunch hour.

Another popular event was Rainbow Day. Students were encouraged to wear rainbows to show they support a safe and respectful environment for LGBTQ staff and students. The GSA handed out free rainbow ribbons and rainbow face paint as well. This day was particularly powerful, since it showed how many students valued this message. As well, with the staff throwing their support behind the day, it sent a clear message about the type of school culture we want in our community.

Overall, these activities and others were a big success and I know the students of the GSA felt proud of their accomplishments. We have made a difference in our school community and I hope we can continue to do so in the future.

Visual texts are great jumping off points for discussion and reflection during literature circles. Since students are reading a variety of books, it is useful to have common texts to help anchor the

Not every book is going to be a winner and not every story will grab hold of a reader's attention. Back when I used to teach whole class novels, this used to be

The Teacher Bees Blog
—
Pride in Middle School
Share this